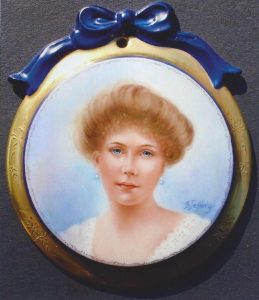 This miniature was painted from an old, battered black and white postcard that I found of the young Princess Victoria Eugenie Julia ‘Ena”, granddaughter of Queen Victoria.

She was soon to marry the young King of Spain at just nineteen years of age Her future husband had already had four assassination attempts on his life and during their horse drawn wedding procession in Madrid, a bouquet was thrown at their carriage detonating an explosive device, narrowly missing the newly weds but killing twenty and wounding a further one hundred.

It was a fiery start to their marriage but Ena, as Queen of Spain, went on to have seven children, devoted herself to hospital and nursing charitable work and was active in the Spanish Red Cross after World War 1. Her British family were all involved in the military.

The portrait readily meets the requirements of the World Federation of Miniature Art; the subject being no more than one sixth of its natural size and in a format no larger than 100 square cm.  The porcelain featured here is 9 ½ by 8 ½ cm in total and Ena measures less than 1 ¼ inches from forehead to chin.

It is paramount when painting a portrait of this size to be thoroughly familiar with the subject and to draw it out on paper, sorting out the tonal values and the features which may not be clear, especially if it is an old reference. Once you establish a few scant guide lines and start applying paint there is not much room to move with alterations.  Make sure that you are placing the portrait exactly in the best orientation. Frequently I take an age to do this. Too high, too low, too much space left or right, is it straight ????   I start by painting the eyes, nose and mouth first, making sure they lie parallel and the angles are correct. Don’t move on until they are. Then the hair in a highlight colour just to hold the facial shape and likewise the background, not heavy, just feeling your way. Even after the first firing, if I am not satisfied with the proportions and angles, I will spend another painting session correcting if need be before applying the flesh colours.  I prefer to paint in a traditional manner as I feel I can keep the soft realism that I like to portray. My palette is a mix of portrait colours plus my usual paints. The portrait was completed with a Raised Paste edge.

Unfortunately, I missed taking a photo of this portrait after it was framed. It was set on black velvet in a gilded frame and where the hole is in the top of the tile, I set a soft, natural coloured pearl which added an elegant touch.  It was hurriedly posted off to the ASMA Victorian Annual Exhibition in 2018 where it was judged Best Miniature over all categories and was sold on the opening night.

Estrella always has some interesting ideas for us to practice.  A plate will be supplied to all attendees unless you prefer to bring your own.
View Calendar

Please view the event calendar for information, dates and times of upcoming workshops.